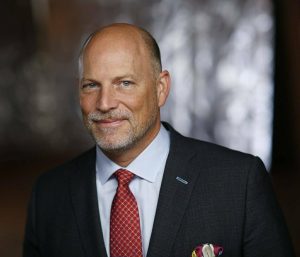 Steve Hawkins, President and CEO at Toronto-based Horizons ETFs, prides himself as being known as one of the “hardest working men on Bay Street”. He attributes a strong work ethic that helped the success in his career of leading a top Canadian ETF provider. He added that a willingness to learn at least a little bit about every area of the business and knowing how to sell to retail advisors was also important.

Hawkins talked to Jobs In ETFs about the importance of how people perceive you, his regret of not having gone to law school and the potential difficulties new ETF providers in Canada face when breaking into the market.

Jobs In ETFs (JE): Can you tell us briefly about your career path?

Hawkins: My parents are Newfoundlanders and I’ve been in Canada all my life. I began my career in financial services in high school as a mail runner for a Bay Street brokerage firm. I went to the University of Toronto to study math and philosophy, did some summer jobs during university, including working on the trading floor of the stock exchange, which led to being very involved in the equity markets. I started in 1987, so I’ve been around for 30 years now, working my way up.

I’ve always been thought of as an extremely hard worker, and I tried to be first into the office and the last out, making sure I got involved in all parts of the company’s operations and wherever I was allowed to stick my nose into. The biggest part of my career was really becoming multi-talented in terms of being really good at some things and developing a deep understanding of most facets of the business.

I was previously CIO and chief compliance officer at other firms and was at Horizons for eight years before becoming CEO. Through those roles, I was basically involved in everything going on, other than sales and marketing, although I did some of that as CIO. I was one of the senior executives here at Horizons. We had a three-member executive management team and after certain changes in management, I became the front-runner to take over as CEO.

JE: Did you consciously strive to work your way up or did opportunities come your way because of your work ethic?

Hawkins: It was partly down to how I wanted people to perceive me. I liked being known as one of the hardest-working men on Bay Street. It didn’t matter what my role was. As my role became bigger and more public-facing, that perception of my work ethic and who I was transcended beyond the people I worked with and the companies I worked for. It also reached the senior management of external clients. It got me noticed by all the people we work with on a day-to-day basis.

JE: Did ‘knowing a little bit of everything’, as you call it, prepare you for facing challenges?

Hawkins: I think that strategy has prepared me for the role I’ve taken and I still enjoy the fact that I learn something new almost every day. Apart from starting from scratch in terms of how to sell to retail advisors, which is a big part of our business, I would say my biggest challenge in moving my career forward is my ability to delegate. I’m extremely meticulous and attention to detail is very important to me. As CEO, I haven’t been able to involve myself as much in the small details, and delegating that responsibility has never been easy for me. Different people will generally never do the same thing the same way, and I’m a pretty picky individual. But you have to let things go, and as CEO you have to think about the bigger picture even if that means letting people make mistakes. It’s also about being more strategic rather than being detail-oriented as to how a spreadsheet looks. It is very important to hire the right people and trust that they can do their work well…

JE: Have you had any regrets in your career?

Hawkins: For me, my career has been very positive overall. Even though I changed companies several times, I was always in the right place at the right time. I would be working in a department of six people, for example, and five people would get laid off and I wouldn’t. I would ask, ‘What about me?’ and they would say, ‘No, you’re too hard a worker to let go, you’re too valuable’. Despite such managerial changes, my career managed to progress.

My single biggest regret was I didn’t go to law school. I had no intention of becoming a lawyer but a lot of the people that are in my position have been lawyers in the past and I see how that solid legal training could have been useful. I don’t think I have any regrets apart from that.

JE: What trends do you foresee in the ETF industry?

Hawkins: We continue to see ETF asset-gathering dominate over mutual funds. This year, incoming ETF assets outpaced mutual assets on an almost two-to-one basis, which I think is the best ratio we’ve ever seen. ETF growth has increased from a percentage perspective every year, taking a bigger chunk of the so-called investment fund industry in Canada, which includes corporate class mutual funds, segregated funds, open-end mutual funds and ETFs. At one point, ETFs were 1% of that marketplace, and now they are approaching 10%. The growth of ETFs generally has been fantastic.

JE: What new projects are you working on?

Hawkins: We will probably come to market with 10 or more products in 2018. We just launched an artificial intelligence ETF and a robotics and automation ETF in December. Those launches have gone very well for us.

Socially responsible investing is also starting to pick up steam. We’ve been looking very actively at bitcoin, too. We are the largest marijuana asset management company in the world right now through our HMMJ ETF, and there might be a supplementary product that comes to market in that space. We will also likely add to our suite of total return benchmark products. Not everything we do is thematic. We have more than 80 funds on our roster. We might close a few, and we will  launch a few more.

JE: Is there a level of an assets under management (AUM) that makes a product successful, especially in your thematic range?

Hawkins: It really depends on who is involved in running the product from a day-to-day basis. If it’s a simple, passive, benchmark product but it’s quite niche – marijuana is an example – you can charge a higher fee to get access to the sector and it becomes profitable at a much lower AUM growth rate.

But if you’re going for very, very low-cost passive benchmarking products, you’re competing with big companies like the Vanguards and the BlackRocks. You have to price them competitively to make a profit or break even, since the required asset levels are significantly higher. They’re almost a loss leader from a product perspective. So, we would launch these funds to continue to round out our product line-up, but the range is far and between. We offer inverse and leverage products, and we are the only provider of volatility products out there – those products don’t have a significant amount of assets, but they are reasonably profitable for us.

JE: What potential issues do you see on an industry-wide level going forward?

Hawkins: A lot of people come into the ETF industry in Canada with high hopes that they can launch a product, thinking products are just bought, but not sold. That is a complete misnomer and a misguided thought process. The Canadian ETF industry is not the same as the U.S. ETF industry.

Canadian advisors are extremely picky and do a lot of due diligence – they want to understand what’s going on, and they don’t necessarily like early stage companies that might not be around two years down the road. Unless you’ve got a very good hook for your product, or great client relationships, it is very difficult to sell in Canada.

We welcome a lot of newcomers into the ETF space because some of them have no idea what they’re getting into. I don’t think there will be any black eyes in the ETF industry, but there will be some consolidation. Newcomers have to understand that it’s not an easy marketplace and you can’t just create a product and make money the next day. There’s a lot that goes into marketing and sales of a product, which is crucial when it comes to what makes a good Canadian ETF company.