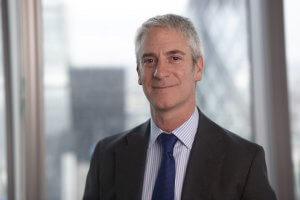 Todd Hollander has worked at Jane Street since 2001, but he had been trading ETFs for years before that – in fact, he was one of the first to trade SPY in 1993. Starting out as an index options trader on the floor of the American Stock Exchange, Hollander is now a senior member of Jane Street’s trading and execution team.

“You might have a good plan but where you end up could be completely different. So, have an open mind.”

Hollander, who was named one of the top 10 most important people in the industry by ETF.com, talked to Jobs In ETFs about helping to grow the company from a behind-the-scenes trading firm to become a world-renowned, client-facing liquidity provider.

Jobs In ETFs (JE): You’ve worked at Jane Street for 17 years. Can you tell us about your personal journey with the company?

Hollander:  I’d been an index options trader on the American Stock Exchange (AMEX) since 1988.  In 2001, I was taking some time off and had a chat with a founding partner of Jane Street, who asked if I wanted to work with them. I was pretty excited about doing that.

I had always loved ETFs as a trader. So I joined Jane Street in January 2001 on the floor of the AMEX. MDY was the ETF I was trading at the time. Having been on the floor since 1988, I had built a lot of relationships and seniority, and I continued market making as a trader of ETFs for Jane Street and collaborating with the team off the floor.

In the beginning, every time you wanted to trade you had to go to a specific place on the floor of the AMEX, or the New York Stock Exchange, and anyone standing in that crowd had the ability to interact with order flow. As technology started to advance and more exchanges were launched, that model changed. Eventually the need to have physical market makers standing in the crowd started to dissipate and we wanted to interact with the order flow in other ways.

JE: You were trading ETFs before you joined Jane Street. When did you start trading them?

Hollander: SPY, the first ETF in the US, launched in 1993 and was allocated to the specialist in my crowd. I traded it from its very first day.

At the time, no one expected ETFs to become what they have today. As we approach $5 trillion in assets 25 years later, it’s been a remarkable story.

JE: Do you miss the old human interaction of the way trading used to be?

Hollander: There is definitely something to be said about looking someone in the eye and doing a trade with them. There are pluses and minuses. One of the biggest positives was you knew who you were trading with; you had a relationship with that person and if a trade was taking place on the floor and there were problems to be resolved, it was easy to do that.

For example, back in those days all of the market makers would stand “in the crowd”. If the crowd and specialist wanted to offer price improvement to a client for any given reason, we could talk to the broker who did the trade and offer a better price.  The print on the tape would be adjusted to the new price and on we went. Today, virtually any trade you do is via an electronic platform. Even if you wanted to adjust the trade or discuss something with the broker/client, it would be hard to track that person down.

That being said, I knew the old way of trading wasn’t a sustainable situation. Before I left the floor, I remember SLV, a silver ETF, traded 20m shares on its first day. I was trading in the crowd with some of my colleagues and it was virtually impossible to keep up with the amount and speed of trading as by that point people could send orders to the exchanges electronically. Specialists would shout these orders out to the crowd and your job was to keep track of what you were trading. At the end of the day we sat there for two hours, adjusting our position and recapping what we had traded and with whom.

JE: Critics often say ETFs lack liquidity, or they lack human oversight. How do you debunk those myths?

Hollander: ETFs are good vehicles to trade and all you need to do is ask questions. Anyone who wants to trade an ETF should ask the same questions as for another security.

A lot of questions are best answered by issuers. With regards to specific product liquidity, as long as the right questions are being asked, you realise there’s a lot more liquidity than you assume.

As we know, the ETF market in Europe hasn’t been particularly transparent. In 2009 when I started out there, we would be doing large block trades with clients, but they were never reported to the tape. So, if someone were to look up an ETF on Bloomberg and say, ‘The ETF doesn’t trade’, that’s not always true. You need price discovery, you need to ask questions and if you look hard enough you can find the liquidity you need.

JE: How important was it for you to work abroad?

Hollander: Moving to London was a wonderful cultural experience and it was very helpful from a business perspective to see how things operated in a different environment.

For example, I remember talking to clients in Europe in 2009 and 2010 about ETFs and there really wasn’t the concept of best execution. I would talk to a client in Europe and the response would be ‘I’ve traded with my friend for the last 20 years and we know you have better prices but we’re not going to trade with you.’ That was very unusual for me, coming from the US where the market is much more transparent and there are things in place to ensure better pricing and trade experiences for the client.  Obviously with the advent of MiFID II, things have changed dramatically and transparency has become front and centre in the world of ETFs.

JE: How did you ensure you rose up through the firm?

Hollander: Jane Street is a place that is very open to suggestions and dialogue. If you have a good idea it’s going to be heard. I realised the notion of liquidity was very important in the world of ETFs – there were more listings, more products and fewer people focusing on them, so we decided to focus our efforts on the ETF business at Jane Street. We thought this was a void we could fill, and people at the firm embraced that. Here we are today – in 2017 we traded $5.6 trillion in securities and $1.7trn of that was in ETFs.

JE: How do you think trading will continue to evolve?

Hollander: Generally, we’ve reached a point where the majority of all trading is done via some sort of electronic platform. My guess is, in the future, it’s just going to be about refining the system as it exists. I think the big movement has already taken place from only having one place to go to trade a product to having multiple venues to trade a product, to figuring out the best way to interact with that trading, whether it’s an RFQ platform, or straight electronic trading on exchange or dark pools or whatever it is. It’s up to us as a firm to adapt to those nuances, which we do a really good job at.

JE: One part of your job at Jane Street is working with ETF issuers to launch and trade their ETFs. How does that relationship work?

Hollander: Jane Street helps issuers bring new  products to market by providing seed and acting as market maker to keep spreads in line. As one of the leading liquidity providers globally, we are constantly talking to issuers.

Sometimes issuers will come to us and say, we’re launching a new product – and depending on the type of product and how sophisticated it is, we talk about product construction and what we believe would be helpful to its tradability. After all, it’s our job to make sure we get the best pricing for the client.

It’s the issuer’s job to create a product that will be useful. It’s really on them to decide what is necessary or needed. Sometimes the client will go to the issuer with an idea and say, we think this would be great for us and we are willing to seed it ourselves.

More important is how we work with the issuer to enhance the client experience. One example – an issuer has a client in Latin America and they want to trade a UCITS ETF: what makes Jane Street a wonderful place to work is our collaborative culture.  We can provide that Latin American client with European UCITS liquidity through our office in New York, and there aren’t any discussions about who owns the client or what the commission split is going to be. We believe that if the client has a good experience, they will trade more ETFs. That’s the beauty of Jane Street.

JE: What has been the biggest challenge in your career so far?

Hollander: The biggest challenge was developing Jane Street’s customer business in the US and Europe. For many years we were not vocal about what we did. In building a client-facing business, we had to get our name out there – talk about who we are and what we do. Since then we’ve done a remarkable job and have become the go-to resource in the world of ETFs.

JE: What would your advice be to people starting out in the ETF industry today?

Hollander: My advice would be to follow your dreams and if you’re passionate about something, go with it. Sometimes things can happen by accident. I was an index options trader on the floor of the AMEX when SPY was listed and put in front of me. I traded it because that’s what traders do. I embraced the idea and here we are today. You might have a good plan but where you end up could be completely different. So, have an open mind.

It’s interesting because you don’t hear many kids say they want to get into ETFs. When I started out everyone wanted to be an investment banker, even if they didn’t know what that meant, but it sounded fancy. But here we are – ETF assets have overtaken hedge fund assets and may one day overtake mutual fund assets. I find it interesting that even today it’s not an asset class or industry that people are focused on.  I think that’s going to change.