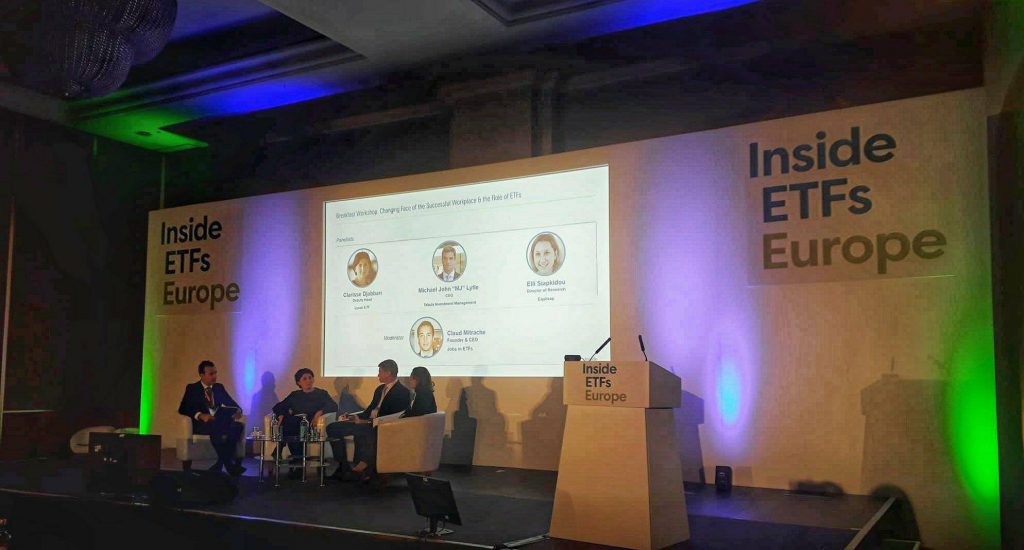 ETF-related companies must adapt their policies to fulfil the expectations of millennial workers, including flexible working opportunities, a gender diverse workforce and a better work-life balance, according to industry experts.

But what is the ETF industry doing to ensure gender parity is not just a “tick the box” exercise?

On a panel at Inside ETFs Europe, chaired by Jobs In ETFs’ Claud Mitrache, senior ETF figures spoke of the need to promote more women to senior positions, as well as offer mentoring and equal maternity and paternity leave.

Clarisse Djabbari, deputy head at Lyxor ETF and board member of Women in ETFs, said: “We see millennials looking for flexible hours and more autonomy, and companies will have to adapt to recruit these future talents. This adaptation will serve women well.”

Her comment followed new data from Equileap, a non-profit organisation aiming to promote gender diversity in the workplace, which found that out of 3,000 publicly listed companies in more than 20 developed countries, no company scored more than 22 out of 35 points when it came to gender equality in the workplace relative to its sector and country.

The report also found that only 7% of the surveyed companies published their gender pay gap. While the UK ranked fourth at a country level, finance was found to rank second in terms of sector, after communications.

Elli Siapkidou, director of research at Equileap, said they had limited ability in terms of being able to track whether the company gender parity policies were being implemented. “We need better reporting from companies to get this transparency,” she said.

MJ Lytle, CEO of Tabula Investment Management, believes there was an urgent need to address gender biases through proper policies and implementation.

“These [bad] behaviours get rooted day to day,” he said. “I’ve met people on gender diversity committees who say one thing in public, but when you ask them what they think behind closed doors, they give you a whole other story.”

He added: “A lot of things we now take for granted and that make sense to us are relatively new trends in society. They are precious and delicate. It’s incumbent on everyone to value diversity and to strive to improve it.”

On a positive note, Djabbari said more women were working in the ETF business compared to traditional wealth management and banking.

“As a new industry it’s very much about sales and marketing with people needed on the ground to do these jobs, which has left some room for women and which is perhaps why there are more women in the senior positions,” she said.

Alongside the creation of networking group Women in ETFs in 2015, the launch of certain environmental, social and governance (ESG) ETFs such as the SPDR SSGA Gender Diversity Index ETF (SHE) successfully raised healthy assets in 2016.

Lytle added that as more ESG ETFs come to market, the data behind the index constituents and their performance would be “transformative” in shining a light on previously ignored subjects.

“Data takes gender diversity from a ‘nice to have’ to a necessity,” he said.

But Djabbari said there was more to be done, even after recruiting more female board members.

“I would like to see women representing finance and strategy on boards,” she said. “It reinforces the gender bias when people say, ‘Women are good at taking care of people, so put them in HR. Women are serious and methodical, let’s put them in compliance’.”

She added that a small increase of women board members would not cut the mustard. “We need to be ambitious and reach for 50%.”